For the second year in a row, Frontenac USD 249 has received the Commissioner’s Award for the Highest Honor awarded by the Kansas State Department of Education.  Frontenac was one of only four school districts in the state to receive this award.   The Commissioner’s Award recognizes districts that outperform their predicted postsecondary effectiveness rate by two or more standard deviations.  A district’s predicted postsecondary effectiveness rate factors in the degree to which identified risk factors known to depress effectiveness rates, such as poverty, chronic absenteeism and student mobility, are present in a district’s student population.

Besides the Commissioners Award Frontenac received two Kansas Gold Star awards; one for its graduation rate and the other for post-secondary effectiveness, and a Kansas Can Copper Star Award for preparing students for post-secondary success. 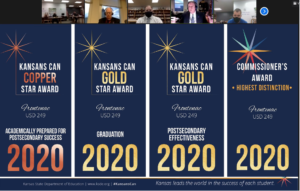