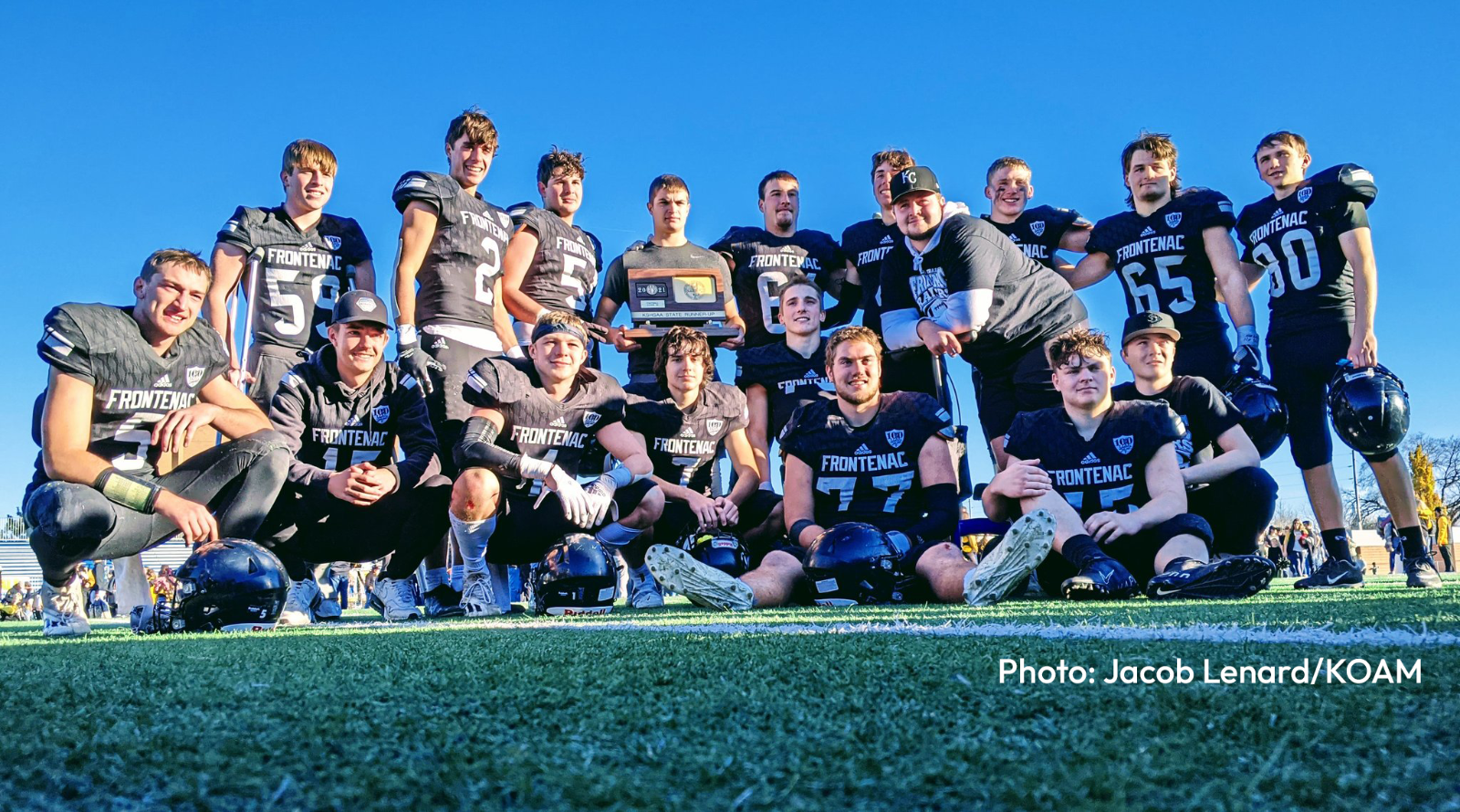 On behalf of the entire football team, we would like to thank everyone for all of their support all season long. We are truly blessed to have such a great school and community support throughout the entire season. We would like to give a special thank you to the Quarterback Club for feeding the team every week, the moms for giving us treat bags for our long road trips, the Booster Club, the city of Frontenac and the Quarterback Club for supporting our trip to Hutchinson and giving the team a great experience. We need to thank the cafeteria ladies for making our team lunch to take to Rock Creek. We want to thank the Frontenac STUCO for creating a very special pep assembly before our Sub-State game against Holton.

We need to thank the parents for allowing their sons to be part of our football program.  We believe that football can teach so many life skills such as teamwork, discipline, work ethic, and trust in the young men that will help prepare them for their futures.  We would like to thank the school administration for all of the help and support all season long.  It takes a lot of work to get ready for a football game and season.  We have to thank DJ, Tom, and Bill for taking care of the football field all season, and having it ready to go every week.  We also would like to thank all of the bus drivers all season for driving us on some long road trips!

A special thank you to the best coaching staff around: Coach John Palumbo, Coach Bill Sullivan, Coach Brady Hill, Coach Jesse Wall, Coach Kaleb Terlip, and Coach Scott Fields! They work so hard every day to have our teams prepared, and they work so well together!  A big shout out to the JH football program and coaches for getting the kids to come out for football and preparing them to play the right way! We look forward to working with you in the future.

The football team completed a great season with a 10-3 record and a State Runner Up finish. We obviously didn’t end the season like we wanted to but we are so proud of each and every player on the team for their dedication and hard work throughout the season. We had a strong regular season with a 6-2 record, but we knew our two losses to Coweta and Girard would help prepare us for a playoff run!  We were playing some great defense, but we were just not consistent on offense during the regular season. We knew we had the potential to be very good, but we were just trying to find our identity. We played in a lot of tight games that really helped us be ready for the playoffs. After a tough loss to Girard (13-7) in Week 8 for the District Championship, we were going into the playoffs with a lot of question marks and doubt from a lot of people that probably wrote us off. Our kids used this as motivation. I remember saying at film session on Saturday morning after the Girard game that we really like where we are at in the bracket, and we think we can get to the State Championship Game.

This is what made this team very special! We had a group of 18 seniors that brought our team together, and we started playing great football in all three phases of the game in the playoffs. Our team was very close, and you could see them playing for each other out on the field. We had a lot of fun together at school, at practice, and especially under the Friday Night Lights! We had created an unbreakable bond and became a family during our playoff run in November. We had great practices, great film sessions, and it translated to the field on Friday nights. Our defense continued to lead us and play great football. Our offense started to dominate upfront and we were running the ball very well. We were creating big plays and we were taking care of the football.

We won the first playoff game against Columbus 26-6 in a rematch from our season opener. We then traveled to Galena to play the Bulldogs for the Regional Championship and won 31-6. We played our best game of the season that night up to that point! We then traveled to Rock Creek to play for the Sectional Championship. Once again our team answered the bell and played our most complete game against a very good Rock Creek team and won 42-26. Our Offensive Line led the way for Mario Menghini, Justice Compton, and Collin McCartney having monster games in the backfield rushing for a combined 369 yards and 5 TDs.

After traveling on the road for two weeks, we were blessed to host the Sub-State Championship game against Holton who was 11-0 coming into the game. We have played Holton 5 times in the last 7 years in the playoffs, so it has kind of become a little rivalry between the two teams. We were major underdogs going into the game, especially after Holton had just beaten Girard the previous week. Everyone in the media around the state was picking Holton to win. We had the best week of practice all season long. The scout team gave us a great look and really prepared us to have a great game each week in the playoffs. Our kids believed we were going to win, and we were playing with so much confidence from the last few weeks’ performances. We were losing 7-6 at Halftime, but we felt really good at how we were playing, and we played very well in the 2nd half and won 32-13. We had standout performances from Cruz Blair and Landon Dean on both sides of the ball. Once again, the big three of Justice Compton, Mario Menghini, and Collin McCartney led the offensive attack. The real MVP of the game was the Pep Club and the community support. Our kids really fed off of the crowd, and used that energy to play our most physical and best game of the season!

We just want to congratulate the team on a great season!

More All-State Recognitions and Honors will be coming up in the next few weeks!